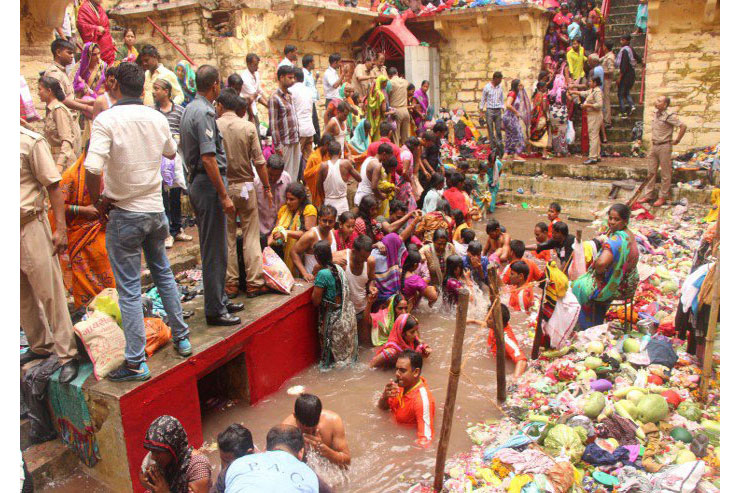 It’s no secret: everyone loves Varanasi . And we’ve all heard about the “must-sees” – the Ganges , Jyotitlinga temple ,B H U  etc So today we are discovering  favorite hidden gems  of Varanasi  !!

Gyan vapi Gyanvapi mosque is  situated  in Varanasi, Uttar Pradesh area known as Gyan vapi where mosque and temple is . It was constructed by the Mughal Emperor Aurangzeb after he demolished the original Kashi Vishwanath  jyotirling a temple at the s
One can clearly notice the old hindu temple wall mixed into mosque.
There is a small well in the temple called the Jnana Vapi also spelled as Gyaan vapi (the wisdom well). The Jnana Vapi well sites to the north of the main temple and it is believed that the Jyotirlinga was hidden in the well to protect it at the time of invasion. It is said that the main priest of the temple jumped in the well with the Siva Linga in order to protect it from invaders.
This mosque was built by Aurangzeb in 1669 CE, after destroying the Kasi Viswanath temple located on the site.
The mosque is named after Gyanvapi (“the well of knowledge“), which is situated between the temple and the mosque.

Bharat Mata Mandir (meaning “Mother India Temple”) is located on the Mahatma Gandhi Kashi Vidyapith campus in Varanasi, India. Instead of traditional statues of gods and goddesses, this temple has a huge map of undivided India carved in marble. This temple is dedicated to Bharat Mata and claims to be the only one of its kind in the world.

Bharat Mata Temple is an unique, has an attractive and huge map of the Mother India on the ground denoting the statue of mother of India. The statue has inimitable design which indicates the Goddess of India for all the religious deities, freedom fighters and leaders. The temple is a kind of admiration to all those who take part in the formation of India as it was built before the partition of the India.

Lolark kund is a famous historical sight of Varanasi which is located in Bhadaini area near Tulsi ghat  .the water of this kund comes from patal lok which is under the deepest sea and it has also the connection of Lord Shiva as there is Lolark kund Mahadev Temple .this site located to the south of Varanasi and at the confluence of Asi and Ganga river and considered to be the most ancient site in the city . there is also a reference in the earliest Puranic Mahatatmya of Kashi .

Lolark is another name of Sun and It is believe that when sun beheld Kashi his heart trembled with ecstasy thus Lolark means Trembling sun and so Lolark is one of 12 form of Aditya .

Kund is the place where image o Sun shines glorify as reflection in the water .Its around 5 feet  deep  and is  accedes by steps  and during the month of September ever year there is special bathing take place at  this kund where married couple take bath together for the baby .

During the  Mughal period the leading poet saint of Krishna devotion  Vallabhacharya (1479-1531),  at the age of 11 years he came to Kashi for study. After completing pilgrimage to all the important sacred places in India, he finallygot settled  in Varanasi. While living in Varanasi at Jatanbar he introduce the philosophy of Shuddhadvaita, and wrote about 84 books. He got married in 1504, and his son Vitthalanatha was born in 1515 in Kashi. Vallabhacharya built a small temple of Krishna, which was renovated and expanded in 1730 by one of the great saints of the same time, Sri Gopal-Ji. The present structure of the temple was built in 1777 and named Gopala Mandir,located in Chaukhambha area. the Gopala Mandir is the patron seat of the Vallabha group of followers. Facing the main temple are the temples of Ranachoda-Ji, Baladeo-Ji and Dau-Ji. Nearby other temples are ones dedicated to Siddhda Durga and Vindu Madhava. === Description ===: On the 8th day of the dark fortnight of Bhadrapada (August-September) falls the birthday of Krishna (the 8th incarnation of Vishnu), which is celebrated in the Krishna related temples, most notably the Gopala Mandir. In the temple, on this occasion the main hall and stage display elaborate scenes of Krishna with his cowherd and milkmaid friends, with tiny cattle and trees, with toys and swings for his pleasure. Distribution of special prasada  to as many visitors as possible is popular. The day after Dipavali (first moon in the Karttika, October-November) is Annakuta (“the Mountain of Food”), associated with the legend of Krishna. Krishna is worshiped as Lord of Govardhana, the mountain He lifted up to protect the cowherd folk from the wrathful rains of Indra (king of the heaven). In a more elaborate form as in the temples of Vishvanatha and Annapurna, the Gopala Mandir, changed to the special place of decoration, celebration and offering of foodstuffs. At this temple 56 types of bhogas (edible offerings to the God) are offered, and 3-day festival is performed there.

Mukti bhavan is situated in Nai sarak road at the corner from left side of Intersection and this is old building where elderly aged people wait for their death and take mutki labh that means when they die at this place they don’t incarnate any more  and they free from rebirth . before going there you will have to take permission from admin there however photograpy is not allowed there .

this is one of the oldest market of varanasi and loacted in extreme old part of Varanasi where you could see still the tradtion of buying and seelling and It is belive that you can get every house hold things in that market .

for aranging a trip to above all these places you can check our website varanasitourspackage.com and manglamtravels.com